I went away. And iCloud lost all my photos, including some of an amazing beekeeper on Waiheke Island and his honeys.

And the weather’s been awful. And I’ve been busy with other work. But spring continued anyway.

The bees are back and I’m gardening when I can.

In one part of the garden, all those open-pollinated seeds from last year grew, flowered and went to seed. Those seeds became a stunning early spring show of poppies, calendula, alyssum, borage (white and blue), night scented stock.

And, of course, the lavender is still there.

Out on the zigzag, new seeds have sprouted and the hollyhocks are growing.

This year, around the hugelkultur, I’m experimenting again, as I work with the seasonal arcs of the sun, very different than on the other side of the zigzag.

I’ve emulated the neighbours and tried pumpkins, some seedlings for me, some for them. Bees love those big yellow blossoms.

The tin cans and other (homemade) metal circles are to deter slugs and snails, which don’t like sharp things. Also cats and birds.

The wire netting helped with some new seedlings. But the birds got under this wire netting and pulled at my Biogro pots, even though the pots were buried. That killed a bean plant or two, alas. The birds scratched out almost all the coriander, too.

And this morning, I’ll plant the very last of the pumpkins and some coriander someone gave me. 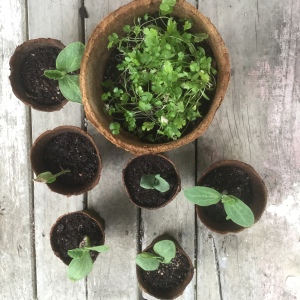 Off up the path I go, past the bees already busy in the blossom. Into the spring(ish) day. 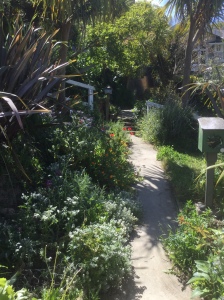